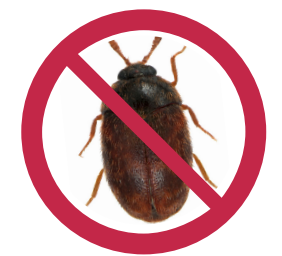 Recent information provided by the Australian Government Department of Agriculture, advises there has been a large number of Khapra Beetle detections within the last month. There is a high level of confidence that most of the infestations originated from the container (under floor) rather than the commodity, however, some of the detections originated from non Khapra Beetle countries such as China and Papua New Guinea and it is suspected that the detected Khapra Beetles may have been living in the container for upwards of 3 years. This is a cause for concern as it appears the Khapra Beetle is moving undetected on containers internationally and therefore posing a risk to Australia, should an infested container arrive at an Australian Port and spread from there.

Rocke Brothers has a Quality Awareness program in place for Khapra Beetle and has already rolled out detection and action training at all of our sites, in line with Department of Agriculture advice and guidelines.

The Department of Agriculture is implementing a number of urgent actions in a phased approach, with a focus on offshore risk mitigation to reduce the spread and minimise the risk of the Khapra Beetle arriving in Australia. Revised phytosanitary certification and new offshore treatment requirements, including Methyl Bromide Fumigation and heat Treatment, will be introduced by the end of this month.

What you should know

What you should do

Back to Main News